Callahan is a mature and eclectic author, who is able to bring to music his vision of a divided and confused Britain.

The album hits the mark with a mutant solution of post-punk, folk, psychedelia,Middle Eastern and African influences,

With this album David Lance Callahan shows everyone (once again) his incredible talent as a musician and storyteller.

Why he has waited so long to record a solo album ...?

Review written on behalf of OndaRock

In June 1986, the english magazine New Musical Express published one of its regular mail-order cassettes. Inspired by the C81 that had been released 5 years earlier, the cassette, which included 22 tracks performed by largely unknown bands that had just signed a contract with some independent labels, could only be called C86. This cassette slowly but relentlessly became the NME’s best selling compilation ever, selling around 40,000 copies and being reissued on LP and cassette by Rough Trade the following year. That name, C86, began to be used (and is still used) to define a specific musical genre. If the C81 brought together important names of the post-punk and new wave scene of that period such as Pere Ubu, Cabaret Voltaire, Scritti Politti, Buzzcocks, Josef K, The Raincoats and Virgin Prunes, few were the bands included in the C86 that subsequently have achieved a remarkable popularity. First of all Primal Scream (who had only released one 7″ at that time), then The Pastels, The Wedding Present, McCarthy and The Wolfhounds. Beyond the controversy that followed the release of the cassette (there were those who saw it as a sort of dumbing down of the indie scene) C86 represented an important and democratic snapshot of the independent British indie-rock scene that emerged in the mid-1980s from post-punk scene.

David Callahan and Andy Golding were the main members of The Wolfhounds. The band, launched by the C86, released four albums and several singles between 1987 and 1990, which were quite successful with their abrasive guitar-based pop. After the band’s break-up, the singer and guitarist David Callahan met Margaret Fiedler, a singer who had just left Ultra Vivid Scene, through an ad posted on the Melody Maker. The two were soon joined by John Frenett on bass and Miguel “Mig” Moreland on drums. The quartet, due to their boundless love for krautrock, decided to call themselves Moonshake borrowing their name from one of the tracks of Can’s seminal album “Future Days”. The band (one of the best within that gold mine called “british post-rock”) signed a contract with one of the most important label of that period, Too Pure, showing off a distinctive sound composed of rolling polyrhythms, propulsive sound, electronics, dub, art rock and (of course) krautrock. After a stunning album titled Eva Luna and an EP, Fiedler left the band to form Laika, while Callahan remained faithful to his creature, and released in 1994 one more masterpiece titled The Sound Your Eyes Can Follow, a record that represented Callahan’s vision of music: deeper exploration of jazz influences, complex rhythmic textures and electronic beading. About this change, listeners were warned by a note on the back cover that clearly stated that the album was “guaranteed guitar-free”. Soul, jazz, funk, and the male/female vocal alternation were again pursued on the record, with the (almost unrecognisable) voice of PJ Harvey, credited simply as Polly Harvey, on five tracks. After another Moonshake album and a very bad experience at Loolapalooza, Callahan moved to the States for a while, re-emerging from oblivion in the early 2000s with a multimedia project called The $urplus! with a new female partner, singer Anja Buchuele, who we will also find in another unexpected comeback, Bark Psychosis’ Codename: Dustsucker. At that point, Callahan started to get the hang of it. First, in 2015, he joined Manyfingers, the new project of Christopher Cole (former member of Movietone and Third Eye Foundation)  in The Spectacular Nowhere album, then he reformed the legendary Wolfhounds with his old friend Andy Golding, first just for a few gigs, then moving into the recording studio.

The outbreak of the pandemic and the subsequent lockdown gave Callahan enough time to work on a number of songs he had been working on for a long time and to write new ones. In his own words, ‘during the lockdown there wasn’t much else to do but catch up on my books, watch films and write songs’. This time at home led the English artist to record the material included in English Primitive (divided into 2 albums) and to write enough material even for two more albums that, for obvious reasons of time, he has not yet started. At the end of 2021 his long-awaited solo debut was released, and  English Primitive I did not disappoint expectations, showing a mature and eclectic author, who is able to bring to music his vision of a divided Britain, a reaction to the snobbery and failures within the British political system. The writing is as emotional, dark, sincere and overwhelming as ever.

It’s not a concept album, but to Callahan the title is a phrase that just sounded good in his head, and it seemed to suit his “non-musician” way of composing and playing the guitar, and, more generally, also fits the lowest common denominator states of English culture and politics that seems to have hit rock bottom as in the post-colonial era with the controversial handling of the pandemic and the contracting out of parts of the NHS to private companies. “Born Of The Welfare State Was I” with its melody and the perfect blend of the author’s and Katherine Mountain Whitaker’s (of the singer of the amost unknown band Evans The Death) voices shows the pride to have been born into a time where we have the welfare state, which the author thinks is one of  the greatest achievements of mankind, especially regarding the benefit to an entire society rather than just rich people. Callahan’s worldview is a bit jaundiced but optimistic, expressed by a line-up of carefully chosen musicians, such as fellow drummer Daren Garratt (Pram, The Fall, The Nightingales) and trumpeter and flutist Terry Edwards (a youth friend and former Moonshake collaborator). Special mention must also be given to the voice and viola of Alison Cotton (Left Outsides), whose dark and tormented folk instincts are perfectly suited to the whirlpool of the hypnotic Middle Eastern jig called “She Passes Through The Night”.

The tone of the tracks range from the folk of “Goatman” and “She’s the King of My Life”, in which Callahan performs two (almost) conventional and pastoral ballads on electric guitar, but with a tuning that recalls Malian and Ethiopian guitarists, to the long and spicy psychedelic ride of “Foxboy”, where samples combined with fuzz guitar and tabla create an intricate and ghostly vision. In the dark “One Rainy September”, probably (in my humble opinion) the highlight of the record, Callahan shows us all his skills as a storyteller, by telling us the story of a soldier who leaves the army returning home after years on a rainy day at the end of summer. But unfortunately the story hasn’t an happy end, as he is barely remembered by his wife and daughter. It is to the girl that the soldier speaks, expressing all his emotions and his feeling like a ghost about to disappear. The dialogue between the two reaches its climax in the verse they sing together:

“You’ll never understand how love gets lost in the mundane. But you will learn how bitter the emptiness tastes, how vacant the space can be under a surname, how different the thoughts under a familiar face”.

All this beauty is underlined by the fantastic work of the string quartet Iskra Strings, by the amazing feel for the song’s inner rhythmic workings of Daren Garratt who starts playing toms immediately after the verse father and daughter sing together, and by a Katherine Whitaker who is increasingly convincing in the role of the confused daughter, so to deserve a song all for her in English Primitive II which, hopefully, will be released in late summer 2022. “Always”, the closing track, shows Callahan’s love for classic songwriters and 1950s torch singers, a sort of an own personal tribute to so-called popular music.

This album is already off  to a great start, so we can’t wait to hear English Primitive II, which, it seems, will be noisier and more psychedelic while maintaining the eclectic range of inputs that is one of the assets of this album. The artwork closes the circle: a reproduction of a stained glass work by artist Pinkie MacLure that perfectly reflects the alternation of darkness and light that permeates the songs.

With this album David Lance Callahan shows everyone (once again) his incredible talent as a musician and storyteller that we had already seen and appreciated with Moonshake and The Wolfhounds, and the value of these seven tracks is so high that it (almost) compensates the inexplicable thirty-year silence that the artist reiterated before revealing himself as a solo artist. David is a sort of cult hero, who once again hits the mark with a mutant solution of post-punk, folk, Middle Eastern and African influences, at the service of stories and short films in music of different lengths that excite and captivate. 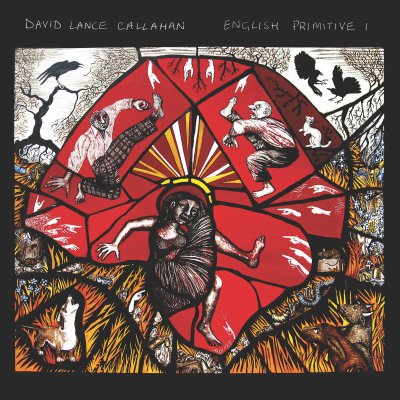