The Rick Brown's comeback is an amazing crossing between style and improvisation.

A record where instinct and improvisation come together with a great interplay between talented players.

The longest tracks could seem (only at first glance) repetitive.

I just removed a dust patina from a record that years ago played quite frequently on my CD player. Start Packing was the amazing debut of a band called Run On, which in 1996 carried out a miraculous combination of improvisation and fascinating pop openings, a sound that was versatile and at the same time strangely accessible. The band was formed by the married couple Rick Brown and Sue Garner along with Alan Licht and David Newgarden. The group was very intriguing, but a year later, after a couple of EPs, they broke up. Licht continued to be extremely active as an artist in balance between minimalism and experimental music, while Brown and Garner occasionally collaborated with Tortoise and other post-rock bands before reappearing together in 1999, when they recorded an album titled Still. After that, they decided to disappear.

When Rick Brown’s great talent seemed to be lost, he reappeared magically five years ago, thanks to the meeting on MySpace (!) with guitarist Che Chen. The association between these 2 great musicians was so profitable, that they decided to form a stable duo called 75 Dollar Bill. The cross between drums, percussions and winds on one side, and guitar on the other, had a significant and growing popularity in Brooklyn clubs. The result (after three self-produced cassettes) was an album titled Wooden Bag that was released in 2015 in a 500 copies limited edition. One year later, the duo decided to expand their roots-blues suggestions recording a new album, Wood / Metal / Plastic Pattern / Rhythm / Rock, that has been strangely reissued just now for the European market by the Tak: til / Glitterbeat labels.

The two start off with a magnificent swirling interplay in the seven minutes of “Earth Saw”, a circular and hypnotic dance with Arab waves. The players start to show their remarkable technical skill, between Brown’s rolling percussion and 6 and 12 electric string guitars used by Che in a simply amazing way. Not only music language it’s expanded in this record, but the number of instruments and musicians too. The two don’t interact anymore only with each other, but starting from the following track “Beni Said”, they are supported by Andrew Lafkas’s double bass, Cheryl Kingan’s sax and Karen Waltuch’s viola, continuing playing as an expanded band. An ecstatic vision that comes from psychedelia to continue increasing intensity, exuding ethnic suggestions and turning at the end into a sort of Celtic dance. The rhythms are studied and syncopated, always carefully chosen by Brown, and crossed with Che’s R&B guitar on “Cummin Falls”, performed again as a duo. During the extraordinary final track “I’m Not Trying To Wake Up”, the two are back together with the sax of Cheryl Kingan and the fantastic contribution of Rolyn Hu’s trumpet, for almost 15 minutes of overwhelming beauty.

There are a lot of influences in these almost forty minutes of music: african and arabic traditions, blues and R&B sounds (both acoustic and electric), psychedelic music and minimalism. Every part of the record contributes to create a world of indisputable charm and hypnotic suggestion. The album was recorded and mixed by Tony Maimone, the bassist of post-punk legendary band Pere Ubu. This is an album where instinctivity and improvisation come together with a refined style performed with elegant perfection, making 75 Dollar Bill an absolutely central act if you are into “other” sounds.

Review published (in Italian) on OndaRock 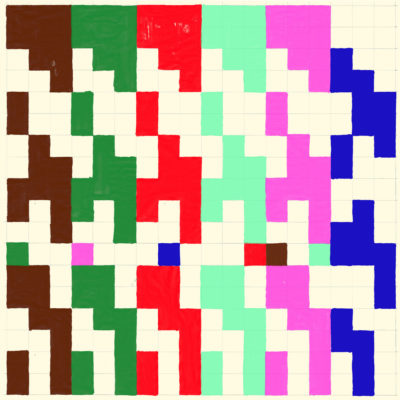